State Senator Willard James of East Tennessee announced today his intention to introduce a bill during the 2017 Legislative Session which would provide legal protections for any licensed Counselors and Therapists who choose to deny service to individuals based on a deeply-held personal objection to the client’s lifestyle as a bigoted asshole. 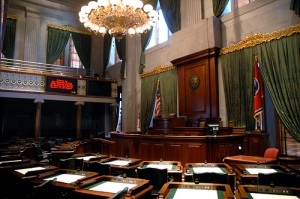 “Ultimately, this is a bill about religious freedom” explained Senator James.  “There are many professional therapists in this state whose faith tells them to “love thy neighbor as thyself”, and therefore feel that discrimination against others is wrong, whether it be against another’s race, age, religion, gender, sexual orientation, or disability status.  These people believe firmly that being any form of bigot is sinful, and that sincerely-held religious belief would be in direct conflict with being forced to counsel to the needs of a revolting asshat who feels a desperate need to validate themselves through the invalidation and oppression of others.”  Senator James claims the proposed bill would reportedly support counselors who personally object to all manners of bigotry, ranging from Klansmen to Mens Rights Activists to even the most common empathy-bereft turdwaffle that practices daily microaggressions against everyone whom they arbitrarily think they are somehow better than.  “My bill is about protecting those counselors from legal repercussions when pursuing what their higher power tells them is the right thing to do.”

Senator James, who made waves in 2013 with his controversial “Don’t Say Gun” bill, was quick to point out that he in no way wishes to oppress bigots themselves, but is merely trying to give recourse to counselors who might find themselves conflicted when faced with prejudiced nitwit clients.  “I have nothing against bigots, personally” noted Senator James, “I fully recognize their right to choose a hateful, narrow-minded lifestyle.  But I also think that someone shouldn’t be expected to work as a professional counselor without knowing a law has been passed to support them if they want to say that they think a person’s lifestyle is completely and morally wrong when said person comes to them seeking emotional or psychological help.  Not even when the counselor has taken an ethical oath of their profession to treat everyone equally, and also already has the right to refer clients to another doctor anyway.  If a therapist’s interpretation of their religion’s teachings instructs them that bigots are reprehensible douchecanoes, then we should make sure that those counselors’ First Amendment rights are not infringed upon and that they are allowed to callously turn away someone whom they consider to be living sinfully.”

State Senator Colby Mathers of West Tennessee immediately declared his opposition to the bill, arguing that the proposal is a thinly-veiled attack on members of Tennessee’s bigot community, particularly those living in more diversely-populated areas.  “Oh sure, I can already hear the argument now about ‘Why would homophobes and racists want to go to a counselor that disagrees with their life choices anyway?'” noted Senator Mathers.  “They say that discriminators would rather know that about their doctor and walk away anyway.  Well, that’s all well and good for people who live in highly-homogeneous areas where intolerance is the norm, but what about the racists and sexists in more diversified areas where it would be harder to find a doctor that’s okay with a bigot lifestyle?  What is your average homophobe supposed to do then, huh?  To whom can they turn?  This is nothing more or less than an all-out act of aggression against law-abiding citizens who just happen feel superior to others.”

Senator James, however, dismisses all such claims of unfairness and provocation as sheer political maneuvering.  “This is purely about Freedom of Religion, and is in no way intended to stigmatize or persecute a particular demographic of people.  Anybody who insists otherwise is obviously overreacting or trying to politicize the issue for their own agenda.”