Onlookers this weekend noticed the return of one of Nashville’s most recognizable couples, as both TDOT construction teams and a section of Interstate 65 near Trinity Lane were spotted spending time together in public again.  The reunion came as a shock to many Nashvillians, who were still adjusting to the news that the long-time pair had gone their separate ways just a few short weeks ago. 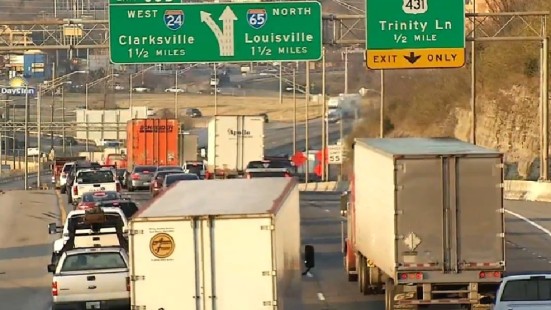 “We tried to stay apart from each other, we really did,” explained Harris Wingland, a foreman for TDOT’s current I-65 crew.  “But it just didn’t feel right for either one of us.  We just… man, we just don’t work right on own.  I don’t want to make it sound like we’re incapable of having our own identity, that’s not what I mean, but… when it’s right, you just feel it.  And when it’s not, well, you feel that too.  The separation wasn’t right, and this is.  We’re meant for each other.”

TDOT crews and I-65-near-Trinity first started seeing each other in October 2012 when they were introduced by then-Governor Bredesen.  The pair became nearly inseparable for over three years, although TDOT was known for publicly predicting they wouldn’t last nearly so long.  The duo quickly became one of the most recognizable power-couples in Nashville history, alongside such other pairings as Andrew and Rachel Jackson, Nicole Kidman and Keith Urban, Hot Chicken and White Bread, or Real Estate Developers and the rapidly dwindling presence of and respect for our city’s history.

Nashvillians were therefore shocked to learn recently that TDOT had left I-65, seemingly overnight.  While the construction crews’ daliances with other roadways were numerous and well-documented, including repeated long-weekends with TN-440 and an infamous, extended affair with downtown’s stretch of I-40 in which the trysting couple locked themselves away from any public scrutiny on multiple weekends, it was still a surprise to find that TDOT and I-65 could even consider calling an official end to their relationship.

This new reconciliation, however, comes as an even bigger shock to most.  “I never liked them as a couple anyway” noted motorist Sharon Charleston, who commutes past the couple daily on her way from Hendersonville.  “They’re attention hogs.  They just weren’t happy unless they made their presence felt to anyone who came near, and I can’t believe I’m gonna have to put up with that again.”  I-65, on the other hand, says the reunion is the best thing for everyone.  “Now that TDOT and I are back together, it’s gonna be great.  Even better than before.  We’ve settled our differences, and now, the future is bright.  We’re gonna hold up traffic in ways we never thought possible.  There’ll be so many orange barrels and flashing arrow signs and fender benders and bottlenecks.  It will be glorious.  Just you watch and see.”

TDOT’s previous ex, the I-40 interchange at Briley Pkwy and White Bridge Road, could not be reached for comment.

Picture of I-65 near Trinity found at http://fox17.com/news/local/tdot-i-65-widening-project-wont-be-complete-on-time