While applauding the Metro Council’s move last night to partially decriminalize possessing small amounts of marijuana, East Nashville resident Sharon Whitherbee says that the local government’s effort still isn’t a bold enough move.  Speaking with local media last evening outside the Davidson County Courthouse following the conclusion of the Metro Council meeting, the self-described Etsy-preneur from the Shelby Bottoms neighborhood announced that she intends to spearhead an effort to allow sales of weed in grocery stores. 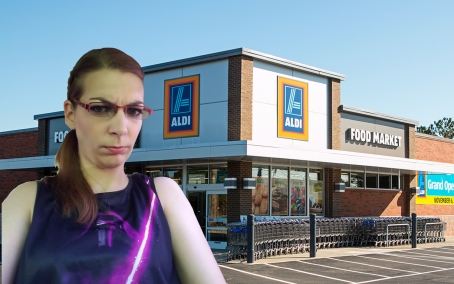 “To put it bluntly, this is only a half-measure, and I don’t see the point in that” Whitherbee told reporters.  “I believe that being able to purchase your pot while you’re purchasing your potatoes is the reality towards which a modern community like Nashville needs to be striving.  Right now, it’s unbelievably inconvenient to have to buy your soap at one place and your dope someplace else.  That’s arbitrary, and it just makes no sense.  For economic reasons, for legal reasons, and just for the sake of not being so damn backwards, we need to do away with the current antiquated, puritanical laws and put marijuana in supermarket aisles where it belongs.  The movement begins tonight!”

Whitherbee is not the only opponent to the bill, which passed last night with a 35-3 vote and now heads to the Mayor’s office for her signature.  Supporters claim that the current measure, which would allow possession of less than 0.5oz of marijuana to be treated as a mere civil infraction rather than a criminal misdemeanor offense, is an important step towards giving offenders a chance at avoiding jail-time and a criminal record, a consequence that supporters claim is disproportionately visited upon minorities.  Some opponents, however, have expressed concern that giving officers the personal authority to decide whether a person is to be treated as a civil or criminal offender is highly and dangerously subjective; this concern is especially potent given the current national climate of increased public scrutiny on the very subject of differential treatment by law enforcement towards offenders of varying ethnic backgrounds.

According to her statements, Whitherbee’s proposal doesn’t address the fact that, even under the new bill, marijuana possession is still illegal, but rather her goal is simply to make pot more conveniently accessible.  “You can get caffeine at a grocery store in a dozen different forms,” noted Whitherbee, “They have pharmacies in supermarkets that track your purchases of Sudafed over the course of a year, and now we even have wine right across from the frozen food and beer cases.  I don’t understand why we’re making this distinction that I can go into Kroger and buy those items, but I still have to go out back of the Aldi to get my weed from a MTSU dropout named Rufus.  There’s just no need for it!”