While vacationing in Gatlinburg with her family this weekend, Nashvillian Rachel Stubbs reportedly closed her eyes and imagined she was riding a rollercoaster at the former Opryland theme park instead of the one she was actually riding at Pigeon Forge’s own Dollywood attraction.  Other members of her family indicated that Mrs. Stubbs may have, in fact, done so on more than one occasion during her time at the park, and with more than one ride. 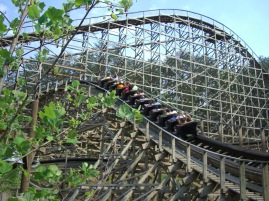 “As we were pulling back into the station on the Tennessee Tornado, Mom had this dreamy, far-away look and cried out ‘Oh, I’ve missed you Wabash Cannonball’” noted Stubbs’ son, James.  “I didn’t know what to say, and the ride operator got this shocked and kinda hurt look on his face.  Later, she kept calling out ‘Yes, yes, Rock and Rollercoaster, I love you!’ while we were on the Thunderhead coaster, and Dad and I weren’t sure if we should try to remind her where she was or not.  It was really awkward.”

For their part, Dollywood representatives admit that this is not the first time that a park-goer has imagined they were with Opryland instead.  “The comparisons are hard to avoid, what with our emphasis on country music and folksy days-gone-by” explained Dollywood communications intern Roger Menson.  “We’ve even got a few very similar rides, so we try to be understanding and not to take it too personally when this sort of thing happens.  All the same, we really do wish those visitors actually liked us for who we are and weren’t just settling for us.”

For her part, according to son James, Mrs. Stubbs doesn’t seem to be overly concerned about Dollywood’s self-esteem.  “Last we saw Mom, she said she was heading off to ride the ‘Grizzly River Rampage’ with this sly grin, and then she looked all embarrassed, corrected herself, and said ‘I mean the Smoky Mountain River Rampage.  Of course, that’s what I meant.  What did I say?’”