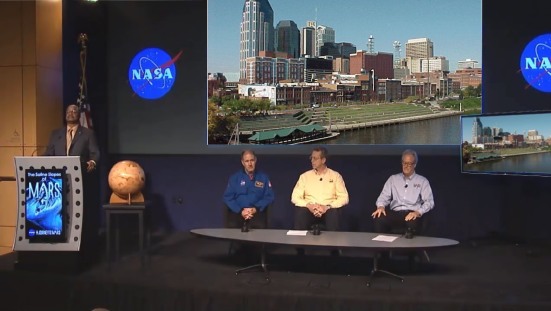 “Frankly, we were as surprised as anyone” explained NASA team leader Fred Jackson.  “We had sent our prototype rovers into the Cumberland as a testing ground to see if they could handle the intense pressures and caustic environments that one might encounter in even the most inhospitable of planetary environs.  But in exercising the sensors of those test probes, we made the remarkable discovery that there is water in the Cumberland!  At first, we were sure that it had to be a faulty reading or a broken instrument, but seven different tests on multiple instruments confirmed the finding!”
NASA scientists revealed that their findings indicate that the Cumberland River’s elemental make-up contains a staggering 14% water content.  The rest, they say, is a mix of spilled beer from Dancin’ In the District concerts in the 1990s, misplaced Red Bulls from various marathons and 5Ks, discarded flyers from your neighbor’s set at Tin Roof, an as-yet-unclassified semi-gaseous element which they are currently calling “Nashvillium”, and the tears of frustrated Titan’s fans.  The science team claim they have been withholding their findings for several years until now, so as not to tip off the public that seeking water was an objective of their search on Mars.