Willem DeParnette, 29, confessed to close-friends today that he no longer believes in “Santa’s Pub”, an establishment which, according to legend, exists on the south side of Nashville near the Fairgrounds.  DeParnette reportedly cited both age and peer-pressure as the motivating factors behind his disillusionment. 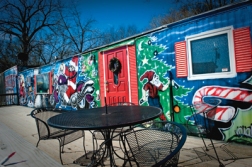 “When you’re a little baby hipster, still just learning to walk in East Nashville, you don’t know any better” explained DeParnette.  “Then you start to get older, your ironic mustache starts to fill-out, and that’s when you wise-up and realize it can’t be true, that it has to be a faerie tale.  But the thing is, though, it’s such a nice fantasy that you deep-down want to believe; the myth of Santa’s Pub is all the things we’d want to be real.  A double-wide trailer that’s been converted into a pseudo-dive-bar with a pleasant, friendly atmosphere? Kick-ass karaoke 7-nights-a-week and ridiculously inexpensive PBR’s?  Who wouldn’t want to believe in that?  But I’m older now and I’ve accepted that it’s just a dream, too good to be true.”

Friends of DeParnette report that the young graphic designer’s behavior has taken a noticeably moody and depressed turn lately; sources disagree on whether the depression was the impetus for DeParnette’s decision to deny the existence of Santa’s Pub, or if it was actually the other way around.  “When I stopped believing in Santa’s, I got kind of depressed, too” noted Missy Sears, a friend of DeParnette.  “You feel cheated when you find out that there’s no Santa’s, that you’ve been lied to all these years.  It’s enough to almost turn you off of skinny jeans for good.”

Another friend, Barry Robbins of Antioch, claims that he proudly still considers himself a firm believer in Santa’s Pub.  “People make fun of me for still believing at my age, but I don’t let them get to me”, explained Robbins, 32.  “I’ve seen Santa’s Pub with my own eyes, and nobody is going to ever convince me that it’s just a myth, that it was all in my head.  Ultimately though, the truly important thing, what I hope that Willem can remember, is to keep the true spirit of love, drinking, and karaoke in his heart year-round.  That’s what it’s all about.”

Editor’s Note: We at The Rhinestone are firm believers in Santa’s Pub; if you wish to become a believer yourself, Santa’s can be found at 2225 Bransford Ave.

Merry Christmas from The Rhinestone!