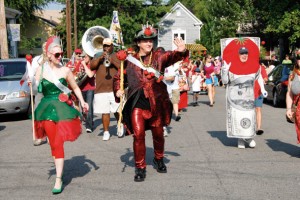 Production still from the upcoming horror sequel, “Parade of the Killer Tomatoes”.

“We, of course, are happy for the youngsters over in East Nashville that their event is doing so well,” said Jackson, begrudgingly, in a press release, “but it’s drawn all of our crowds away.  Nobody even seems to care about our tomahtoes anymore.  Attendence at the Belle Meade event has been steadily declining for the last five years, and it’s just no longer financially feasible for our rival festival to continue.  We are reticent to do so, but in light of current circumstances, the 2012 West Nashville Tomahto Art Festival Committee has decided to call the whole thing off.”

The 2012 East Nashville Tomato Art Festival is being held this Saturday, August 11 from 10am-10pm in and around the Five Points area.  More information can be found at http://tomatoartfest.com/