The Opry Mills shopping center reopened today amidst a great deal of fanfare, while local citizens tried to appear enthusiastic and conceal their disappointment that the Opryland theme-park hadn’t been rebuilt instead. 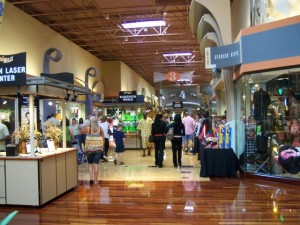 “I’m sure it’ll be wonderful” stated Beverly Williams, a Bellevue resident and mother of three, sounding somewhat somber and resigned.  “My husband enjoys blowing his paycheck at Bass Pro Shop, and while my kids probably would’ve loved getting to experience the Screamin’ Delta Demon or the Wabash Cannonball, I’m sure they’ll still enjoy it when I take them pants-shopping at Saks instead”.

The Opry Mills shopping complex had been shut down for reconstruction ever since it was nearly destroyed by the massive floods of May 2010.  During the nearly two years since, numerous public squabbles between mall-ownership, reconstruction contractors, and the mall’s insurance agencies had caused many to speculate that perhaps the massive shopping destination might never return at all; several Nashvillians even openly expressed a hope that the site would be leveled and used to rebuild Opryland USA, a country-music theme-park which previously occupied the site from 1972 until 1997.

Those hopes were dashed in the summer of 2011, when rebuilding resumed and a March 29, 2012 Grand Re-Opening was announced.  Though the newly-revamped mall features a host of new stores, along with several returning favorites and the mid-state’s only IMAX theatre, several locals seemed to find it difficult to be entirely pleased that their beloved and sorely-missed theme-park wasn’t the property being resurrected.

“No, it’s… I’m sure it’ll be great” said mall patron Franklin Parsons, a lawyer from Dickson, without a trace of irony.  “I’m really glad that I can see the some sh***y movie in 3D IMAX again.  I’m sure that there’s no logistic way that a theatre like that could’ve been incorporated into a rebuilt Opryland; they only build IMAX’s in malls, right?  And really, I’ve missed Opry Mills too.  Roller coasters are great and all, and opportunities to create memories with my family, memories of fun vacations without traveling several hours to Knoxville or Cincinnati or Indiana, would’ve been wonderful.  However, there’s a need for this mall too.  Since it closed, I’ve been at a loss for where to find old souvenir Coke bottles, carboard cut-outs of James Dean and Marilyn Monroe, and novelty license plates that say ‘I Heart Elvis’ on them.  Plus, trying to get to the 2nd Avenue Sbarro is too much hassle; not having the food court was killing me.  I didn’t even know where to find a costume last Halloween, for crying out loud!  It’s been like a part of my soul was missing”.

Economist Phil Parks noted that the mall’s return is a greater boon for Metro than the return of a theme-park.  “The mall brings more employment opportunities than a theme park.  Instead of just employing a few-hundred teenagers with jobs like ride operators, guessing people’s weight, and walking around dressed like an 8ft-tall mandolin, Opry Mills can employ several-hundred people with jobs like selling toy helicopters that launch from handheld devices or running glow-golf attractions.”

In the meantime, disappointed locals are consoling themselves with the concession of Dolly Parton’s announced plans to open a water park across the street from Opry Mills (just down from the Wave Country water park) in 2014.  “It won’t be the same, but I suppose it’s a good thing to have the mall back” admitted Beverly Williams.  “Being from Bellevue, I know first-hand what an essential role a mall can have in its community.”

(The photograph was found at http://www.city-data.com/picfilesv/picv28962.php)