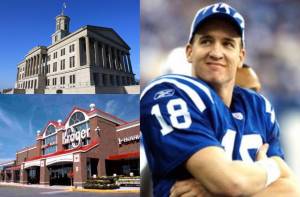 The Resolution passed today in the Tennessee House of Representatives, urging Petyon Manning to return toTennessee, is in danger of defeat after the Tennessee Senate has attached an amendment, further requesting that Manning pick-up a few things on his way back.

The initial resolution, House Joint Resolution 785, states “Be it resolved…that this General Assembly wholeheartedly supports the Tennessee Titans signing Peyton Manning and urges Mr. Manning to remember his roots in the Volunteer State as he makes his decision about where to play football 2012”.  The resolution then goes on to issue a hearty welcome to Peyton, and hint at the likelihood of the Titans winning the Super Bowl if he does.  Text of this HJR can be found at http://www.capitol.tn.gov/Bills/107/Bill/HJR0785.pdf.

However, Senator Colby Mathers, a freshman Senator from West Tennessee, has countered by introducing a Senate Joint Resolution, nearly identical to the first except for a third provision at the end.  Following the existing language in the HJR, Sen. Mathers’ resolution adds “Be it further resolved that, in light of Mr. Manning’s roots (which we again urge him to consider), we ask that he pick-up a few groceries during his return trip toTennessee.  We are out of milk and could use some toilet paper for upstairs, the public welfare requiring it.”

If passed, Titans executives worry that the Mathers Resolution could prove a dealbreaker for Manning and send him looking for other teams.  “This is the wrong message to send” said Titans representative Joel Manning (no relation) by phone.  “Peyton has done a lot forTennessee, and we don’t need to guilt-trip him into running errands for us.  True, if he picks-up the odds & ends inKentuckyon his way back, the sales tax would be cheaper, but that’s besides the point [sic].  I’m sure the Steelers or the Ravens wouldn’t ask him to pick anything up for them.  Maybe the Falcons, but do we really want to go there?  Why don’t we just ask him to gas up the car while we’re at it?!”

The Mathers Resolution has not yet been put on calendar for discussion in the Senate.